An Interview with Deborah Koff-Chapin by Cat Saunders

One of the gifts of interviewing people is that I get to meet some amazing people. Some of them are well known; some are not. Then there are those who will be famous, given enough time for word to get out. Deborah Koff-Chapin is one of those people. 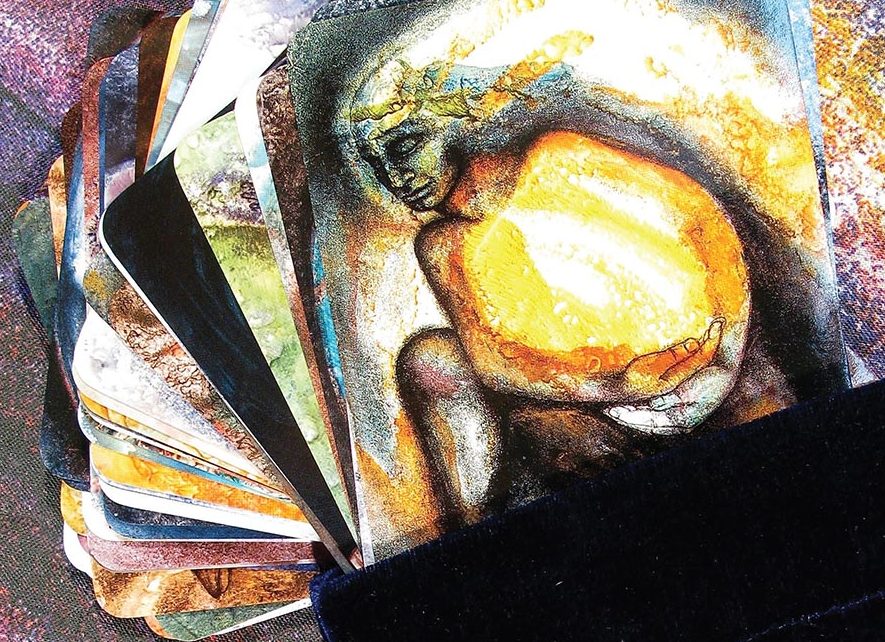 When I wrote those words in 1991, I knew that I would be writing about Deborah Koff-Chapin again one day. Although Deborah would humbly resist my use of the word famous to describe her, the truth is that her extraordinary SoulCards deck has sold 40,000 copies worldwide, and it’s been translated into four languages since its release in 1995.

Now SoulCards has been joined by SoulCards 2, a sister deck of sixty more unique and powerful images that are offered without interpretation for the purposes of reflection, inspiration, and creative delight. These images come into the world through a process called Touch Drawing, which was given to Deborah in a state of playful revelation during a mundane cleanup task on her last day of art school 26 years ago.

Cat: Will you tell the story of Touch Drawing?

Deborah: I went to art school at Cooper Union in New York City in the early ’70s. The art world was very conceptual and abstract then. It had an element of the sacred within it, but there was a calling in me to create more direct human imagery of a soulful kind.

In my last year, this calling surfaced in a moment when I did a little doodle and wrote, “What’s wrong with drawing a face?” I scribbled this stupid little cartoon face, and it almost felt like I’d done a dirty drawing, so I tucked it away. Still, there was something powerful about manifesting that. It was like a seed.

When I found Touch Drawing, that seed popped out of the ground. It happened on the last day of my last year in art school, when I was helping a friend clean a glass sheet that was covered with printing ink.

I put a paper towel down on the sheet of inked glass, and I began to play by moving my hands on the back of the paper towel. When I picked it up and turned it over, I was blown open. It was a thunder-and-lightning kind of revelation to see the lines that had come directly out of my fingertips, especially after all those years of sitting twenty feet away from a painting and contemplating it for an hour before making another stroke. To have this direct expression right out of the human body! I knew that what was being given to me was something much bigger than for myself alone.

While knowing that I wasn’t just doing it for myself, I also realized that I was doing it for personal survival. It was a time when I had no support structure- – not even the understanding of friends. Touch Drawing was my thread through that time. Even when I felt crazy or in pain, drawing helped me access a stable place within. In giving form to my feelings, no matter what they were, they became externalized and somehow redeemed. What I eventually realized was that I was not only creating images; I was sculpting my own self. I haven’t stopped since.

Cat: Since I’ve studied human neurological functioning for many years, I’ve wondered why Touch Drawing affects people so deeply. Something quite profound happens when you draw with both hands simultaneously, without implements. Both hemispheres of the brain can express together at once.

Deborah: Even when you do Touch Drawing with one hand, it’s completely different neurologically from when you draw with an implement, because you’re drawing with an ungrasped hand, an open hand. Also, it’s not just your pointer finger that you’re using like a pencil.

Cat: I’ve used my elbows to do Touch Drawing – and sometimes my feet!

Deborah: I find that my middle finger is often the lead finger. I’ve looked at charts for acupuncture to see what each finger connects to in the body. There’s a lot going on! You open all these channels when you work with an open hand and use all your fingertips and palms. It’s energy work.

Cat: I remember you saying that a few people mentioned to you that they thought that some of the images in your first deck were “too dark.”

Deborah: Some people think that spiritual art is best represented by disembodied, astral images that are often painted with white and have a certain sweetness to them.

Cat: As if God is only about one part of existence.

Deborah: Some people think so, but my work is embodied and feeling-full. It doesn’t fit neatly into the standard spectrum of art styles. I think of SoulCards as spiritual art, yet they are very different from most of the work that is done in this area.

When I’m selecting drawings for SoulCards decks, I try to find as broad a range of feelings as possible, so there’s something to meet people wherever they are. If you’re in pain, and you pick up a deck that’s only about angels and sweetness, some part of you will feel cut off and denied. If instead you pick up a deck and find a reflection of where you are right now, your experience is affirmed. You know it’s okay, that it’s just another feeling.

Deborah: Right. In my decks, I try to show as much weather as has moved through me. There will always be a wide range feelings and experiences in my work, and this may include images that express a moment of pain.

Cat: I wonder if you’d talk about your process of bringing SoulCards into form, since you published both decks yourself?

Deborah: There were two women who were very honest with me when I was considering whether to publish SoulCards on my own: Kathy Tyler and Joy Drake, who did the famous Angel Cards from Findhorn. They said, “If you’re going to do this independently, be prepared to give a year of your life to it completely.”

Cat: Just a year? Were they kidding?

Deborah: A year! Now I laugh at that! But basically, for a whole year, that was all my life was about. They prepared me for the fact that independent publishing isn’t just about getting the cards printed. Actually, I’m glad I didn’t really know what was involved with getting SoulCards off the ground, because I might not have done it.

Deborah: It’s very much like having a baby. You can read everything about labor and birth. You can hear everybody’s story, but yours is going to be different from anyone else’s. All you can do is get a sense of the range of childbirth experiences.

Cat: You actually did a series of Touch Drawings when you were in the process of giving birth to your daughter.

Deborah: I like to have my drawing board available for important experiences in life, so I brought it to the hospital. I had to be in the hospital because of complications. During labor, which for me lasted about thirty hours, I drew during contractions. I should have drawn for more hours than I did, because drawing took the pain and spread it out all over my body. Also, instead of waiting for a contraction to be done, I was actively creating with the pain.

I think that’s a core theme for me: If you can create with whatever is happening in your life, you redeem it in some way. You put it outside yourself and do something with it that’s beyond yourself.

Cat: It sounds like there was no way anyone could have truly prepared you for your experience of childbirth, just as no one could adequately prepare you for independent publishing.

Deborah: Yes. Many people approach me and say, “Oh, I have this idea and I’m going to publish it myself!” I can tell who’s really serious when I throw out a few things about how much I’ve spent. It’s at least in the multiple tens of thousands of dollars – like $40,000-$60,000 to launch a project.

Cat: Right. I thought it would cost about twenty grand to independently publish my book, but it was actually closer to $40,000. High finance and creative debt!

Cat: People make such assumptions. They forget to divide those 40,000 sales by five years, or they don’t realize that you must repay that huge initial investment or loan. Also, they might not know how many people take a cut from each sale, or they don’t understand about ongoing expenses.

Deborah: The truth is, I make a very modest income. Not to have lost money as an independent publisher is considered quite successful.

I’m grateful that the SoulCards have at least brought in enough income to support Touch Drawing and all the other aspects of my work. But there’s always another expense. The overhead is enormous.

Cat: There’s another cost with independent publishing, in terms of sacrificing other parts of your life in order to do all the mundane tasks associated with pre-press production, printing, marketing, fulfillment, networking, you name it.

Deborah: Sometimes I feel as if I’ve created this beautiful gilded cage for myself. Piles of papers. Little notes. Ongoing communications with people. It’s not any single thing. It’s the whole gestalt of everything it takes to support the process of Touch Drawing in the world.

There’s something important about balance and having the self-discipline to say I need to create studio time. But there are other times when, like a mother, I have to let go of having studio time.

A long time ago, I gave up the idea that sitting in the studio, drawing, is somehow higher, creatively, than other things. Since then, I don’t feel any less real when I’m in the office than when I’m in the studio. I just follow the creative force wherever it calls me at any particular time.

Cat: Where is your creative process leading you now?

Deborah: SoulCards 2 has just been released, and I’ll tell you a secret: I already feel like doing another deck. I want to do a deck of faces only.

Deborah: Right! It’s a very core part of my work to bring through these beings – to draw deep, soul-spiritual faces. I’ve never selected these kinds of drawings for SoulCards because the faces have a different style and color quality. With SoulCards, I simply drew whatever was happening for me. Later I made the selections. For this set of faces, I may intend them for a deck. I don’t exactly know how this will happen, but I am feeling inspired to work on it. I may go into the studio and ask, “Who wants to come through?”

Cat Saunders, Ph.D., is the author of Dr. Cat’s Helping Handbook, available at bookstores or <http://www.drcat.org/>.

This interview originally appeared in the October 2000 issue of The New Times, published in Seattle, Washington. It appears here with permission.