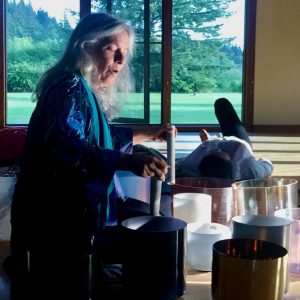 Come rest in sacred space with nothing expected of you. Deborah creates a deep and resonant sound field with her gemstone crystal bowls and evocative vocals. Bring a mat and anything else to make yourself comfortable. The sound field will open at about 7:05 and continue until 8:00. We close in silence so you can slip out without socializing. Each session is a new emergent energetic field.

Deborah offers twice monthly Sacred Song Baths on Whidbey Island, one at Healing Circles in Langley and another at Aldermarsh in Clinton. No preregistration – Love offering goes to the hosting non-profit center. Deborah occasionally offers an expanded Song Bath with SoulCards when she travels. Scroll down for videos. Read Deborah’s music bio.

Deborah Koff-Chapin conjures magic through the use of her voice and the crystal bowls. It is both primal and ethereal. It fills the space and holds us in a warm, comforting embrace. If the physics and mechanics that govern the orbits of planets and the course of rivers had a voice, this would be it.” —Kelly Lindsay, Co-founder, Healing Circles

Read Kelly’s full article about his experience of the Sound Bath at Healing Circles.

Your singing bowl chant opened holy space. I am in awe, and I am so grateful for all that you bring through.” —Rabbi Ted Falcon

If the aurora borealis had a song, it would sound like this.” —Catherine, Song Bath participant

Deborah Koff-Chapin has been holding sacred space through sound since she began using her voice and drum to facilitate creative process workshops in 1980. Her early vocal openings developed in the 1970’s within the practice of Long Dance with Elizabeth Cogburn, and in chanting with Hilda Charleton at the Cathedral of Saint John the Divine in NYC. Deborah later trained in classical singing with Maestro David Kyle. In recent years she has developed a set of alchemy crystal bowls which serve as a harmonic foundation for her improvised vocal attunements. Deborah is an ordained minister of Incarnational Sprituality. She offers ‘Song Bath’ monthly at Healing Circles and at Aldermarsh Retreat Center on Whidbey Island, Washington. Deborah is the originator of Touch Drawing and facilitates the process internationally. Her music is a central component of her workshops. Deborah is creator of the best selling decks SoulCards 1&2, and SoulTouch Coloring Journals. She is author of Drawing Out Your Soul. 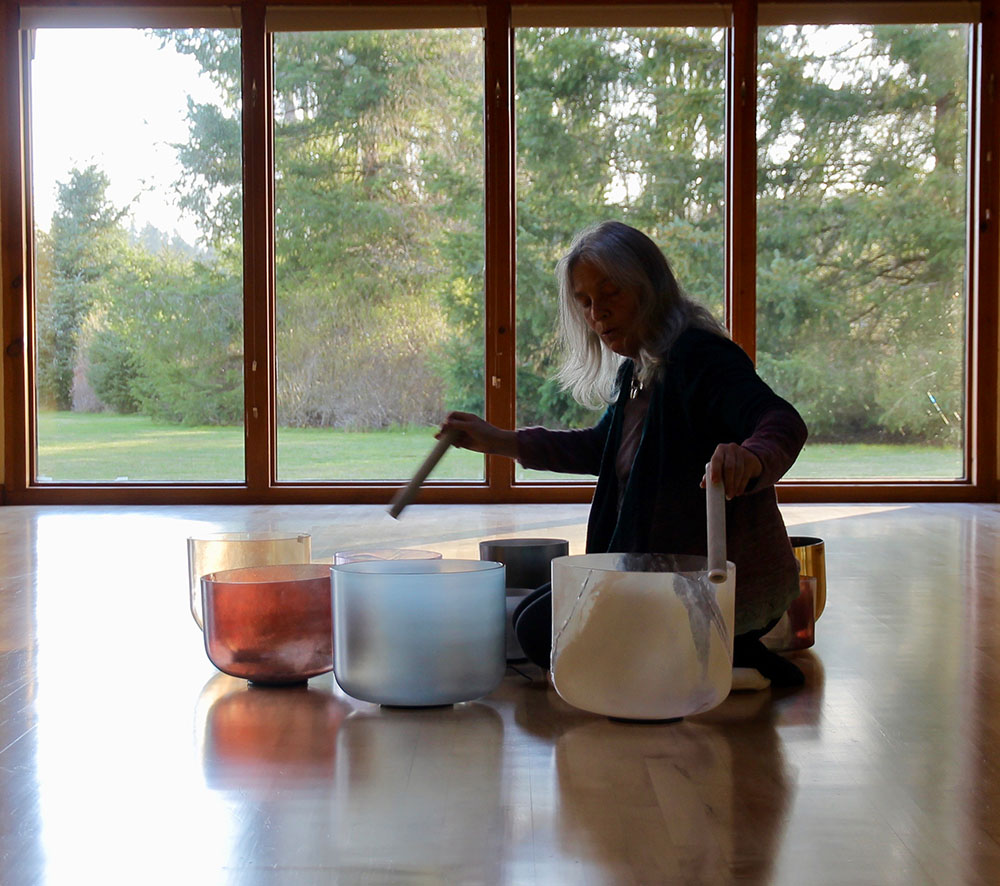 Sourcing Light in Turbulent Times - An image for t

The sample proofs of my new deck Portals of Presen

A walk in the Classic U forest, a 250 acre old gro

Mystery Within... An image from #soulcards2 by @de

All Images and Content Copyright © 2020 DEBORAH KOFF-CHAPIN  All rights reserved.