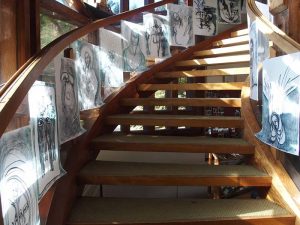 From September 27– October 3, 2014, the Findhorn Foundation and Community hosted its most ambitious event to-date, the week-long ‘New Story Summit: Inspiring Pathways for our Planetary Future’ – a multi-generational, multi-cultural, global dialogue into the co-creation of a coherent new story for humanity.

The event took place in the Universal Hall

with 335 participants in attendance, from all over the world, and hundreds of additional summiteers joining via live streaming. Deborah Immersed herself in interpretive Touch Drawing throughout the week, creating 110 images. She presented a 10 minute digital experience of the images on the final day of the Summit. Drawings Deborah created during the Summit were used as headings for each section of The New Story film.

Deborah donated the originals to the Findhorn archives. Please contact The Center for Touch Drawing if you are interested in using the images for related causes. Fine Art Prints of any image can created in a range of sizes. Order directly from the gallery. A percentage of proceeds will be donated to Findhorn.

Most of the sessions can be seen via webstream. You can click on thumbnails and scroll through gallery images from each session as you watch that session’s video.

About two minutes into the video, Deborah shares a 10 minute slide sequence of all 110 Touch Drawings she created during the Summit.