by Nancy Shemaya Blauer accompanied her family through Auschwitz and offers her story:

As a Jew one of my struggles has been 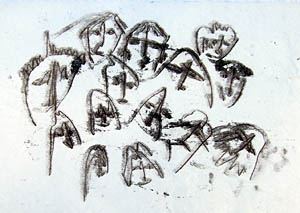 how to experience and express the immense emotions that engulf me as I continue to learn about the Holocaust.  In 1997 when I visited Auschwitz with my family similar fears arose as to whether I had the emotional vocabulary to walk through a concentration camp. Wandering through Auschwitz, I didn’t know how to feel or how to make sense of it all. I wanted to be as open as possible to the experience yet didn’t know how to do that without falling apart. A lot of the experience was really numbing, overwhelming. As we moved from one scene to another, my body fell into silence and I felt motionless.

In my hotel room a couple of hours later, Touch Drawing allowed me to move into those places where my body carried the silence and tap into that. In Touch Drawing, I was able to move back through the experience of walking through the gas chambers, past the ovens, on the grounds. I could allow my body to remember, to have that deep sense of knowing, and to create a form to hold it in. TD allowed me to move again, making those experiences mobile and alive. The pictures were not my best drawings. Though I’m attached to making something that looks good, I know that TD goes beyond that. It lets me go into my experience and have a handle to bring it to a different level.

After drawing these images I remember feeling as though I had released some of the shroud of emotions that covered my being.  Although nothing had changed and the unbelievable magnitude of the Holocaust had occurred, I felt that touch drawing had given me a larger perspective and a different way of bearing the weight of my emotions.  As I return to these drawings almost 10 years later they still reflect the unbelievable horror of the Holocaust and provide a language beyond words to express my feelings.

Join me at the Shift Network Sound Healing Summit

A bit of service during my hike in the Olympic Mou

Slow down for a moment. Relax and gaze…Listen. P