In July I taught a one week, half days Touch Drawing class for children ages 7 to 12 at Penland School of Crafts in North Carolina. Nine children attended the class. None of the children knew one another, but by the end of 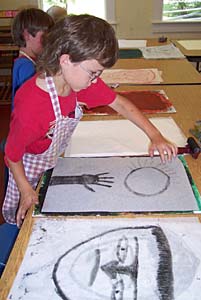 the week strong bonds had formed. This was one of the most enjoyable and exciting classes I have taught.

The outline of the day consisted of gathering to draw for an hour and a half, breaking for a half hour to play and eat snacks, returning to title drawings and choosing favorites to share with the group. The last half hour or more we would explore ways of using the drawings like making tissue stained glass art for the windows, or adding color and mounting.

The first day of class while introducing the medium I encouraged them to allow the story of who they were to come out in their drawings. These children drew with enthusiasm every day, and each day more came to the surface. One girl drew an image of a hand with spiraling lines over 30 times only using black ink trying to achieve the ‘perfect’ look without distraction of color. She knew what she wanted. She was patient and determined, and felt relieved when she drew the one she had been waiting to emerge.

One day it felt safe to ask if the children believed they had guardian angels. All the children raised their hands. I showed 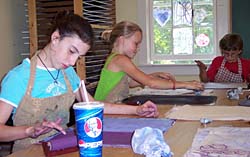 them an example of drawing faces. One boy drew over 20 different faces of his guardians. Two girls began doing joint portraits, and drew together using feet, elbows and hands.

The last day, I congratulated the children for not holding back. They had drawn feelings and angels and other faces and played with symbols and textures and spontaneous images. They had even drawn from their stuck places. They delighted in sharing their drawings with one another. One boy said, ” I liked learning how to draw a new way.” Another said, “It was a chance to express my feelings about what’s inside me.” One of the girls had drawn a mother swan with babies. She said she learned things about herself through her drawings, like how her mother and grandmother take care of her. They all said they wanted to return next summer. 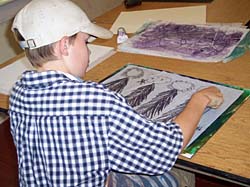 Sharing Touch Drawing with children was an experiment for me, one I’d like to try again! I began with so many questions. I learned, again, to trust the process and let it lead. It was a great learning field.

Katrina Plato is a Registered Art Therapist, potter and educator. She lives in North Carolina. sensuousearth@yahoo.com 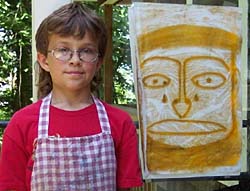 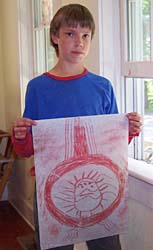 May We be Illumined by Source - An image fir the S

Tending the fire through the dark days. I am honor

Sourcing Light in Turbulent Times - An image for t